Exploring the Relationship Between Art and Technology

In my personal inquiry, I decided to focus on digital art, which for me had always been an unknown territory. Although I had not had any experience with it, I was curious about the process of creating art on a digital platform. Particularly, I wanted to explore the ambivalent relationship between art and technology. For example, in what ways can digital devices help us create art? How does it differ from traditional forms of art? What are the pros and cons?

The First step in my inquiry was to find the right tool. I preferred drawing directly on a screen to using a drawing pad. I also wanted my digital drawing experience to be as close to the physical one as possible. After getting my hands on a few software, such as Adobe Illustrator (Mac with a wacom drawing pad), Adobe Photoshop (Mac with a wacom drawing pad), and ibisPaint (iPad), I realized that Procreate fits my idea the best.

Procreate is convenient. It works on iPads, which means I can carry my project around and draw anytime I want.  Meanwhile, Procreate is fairly comfortable to use. Compared to other software, the experience of using Procreate felt to be the closest to drawing an actual painting. Procreate is easy to pick up. Although I have encountered some difficulties in the beginning, I found the software to be relatively user-friendly.

Since I did not like the basic tools on Procreate, I also needed to get a different set of brushes. In the end, I decided to use “The Spitshading Toolkit,” which I found on CreativeMarket. I particularly liked the texture of lines created by the brushes. It felt very dense and fluid.

Since I did not like the basic tools on Procreate, I also needed to get a different set of brushes. In the end, I decided to use “The Spitshading Toolkit,” which I found on CreativeMarket. I particularly liked the texture of lines created by the brushes. It felt very dense and fluid. 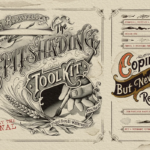 When I first started to use Procreate, I found the surface of my iPad to be very slippery, which made it difficult for me to move my Apple pencil. The lines I drew felt unnatural and awkward. Soon I discovered that I needed to reenact the feeling of drawing on paper. Therefore, I ended up using a “paperfeel screen protector” on my iPad, which helped me solve the problem completely. It is amazing how a small detail can make a big difference.

After getting used to drawing on a digital platform, I noticed a few pros and cons. The difference between the two is perhaps similar to the difference between handwriting and typing. Needless to say, it is much easier to make corrections on Procreate than on paper. On Procreate, if something goes wrong, one can always go back and redo each step. At the same time, making art on Procreate is clean and does not require any cumbersome physical tool. (After all, there is a reason why artists wear aprons when they draw.) Moreover, specific features on Procreate can be very helpful, such as copying and pasting, blending, changing the transparency of colors, and making perfect geometric shapes. My favorite one would be being able to draw on different layers. I could sketch, draw lines, and color without them getting in each other’s way. Personally, I think it is one of the biggest advantages Procreate has over paper drawing. 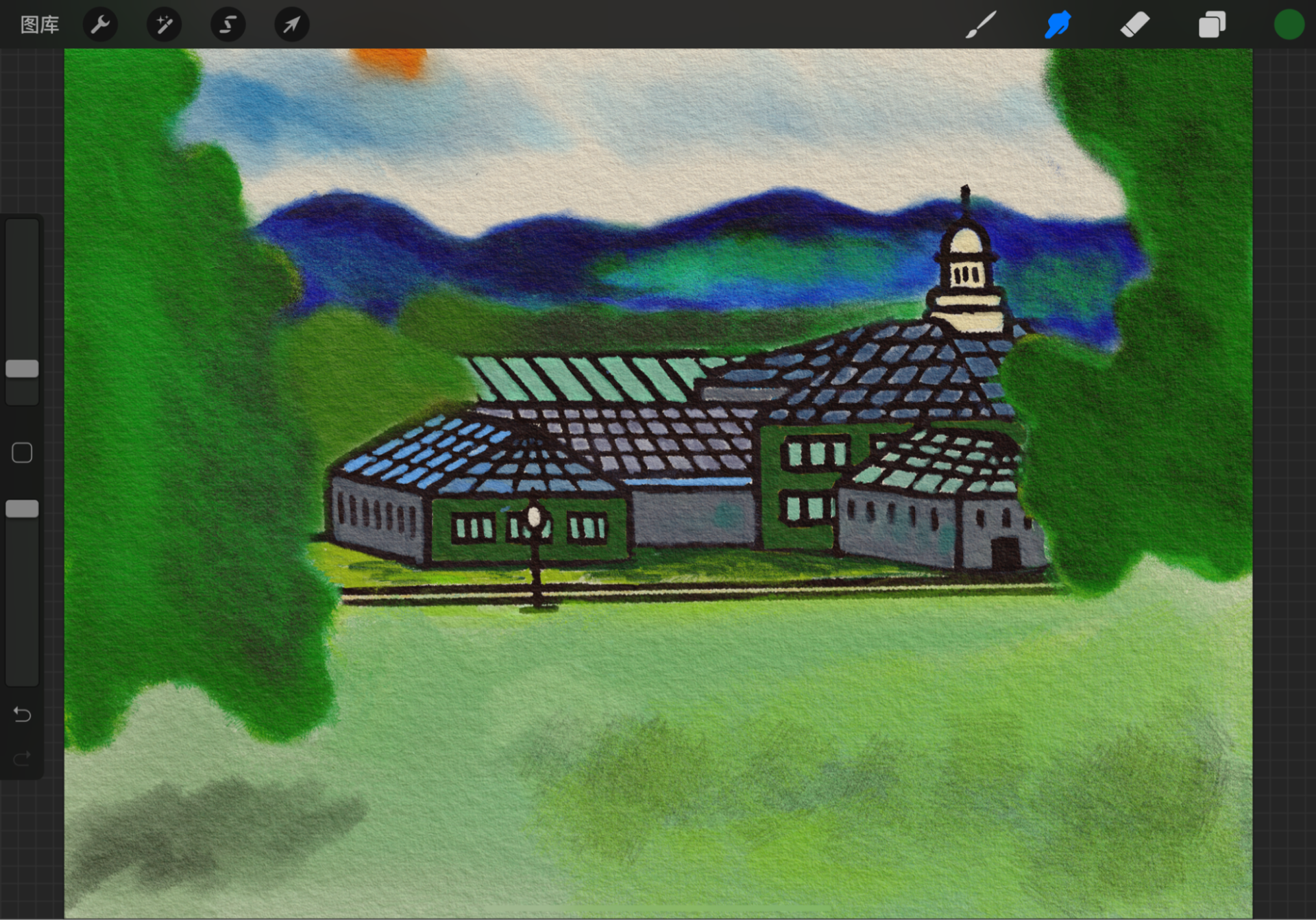 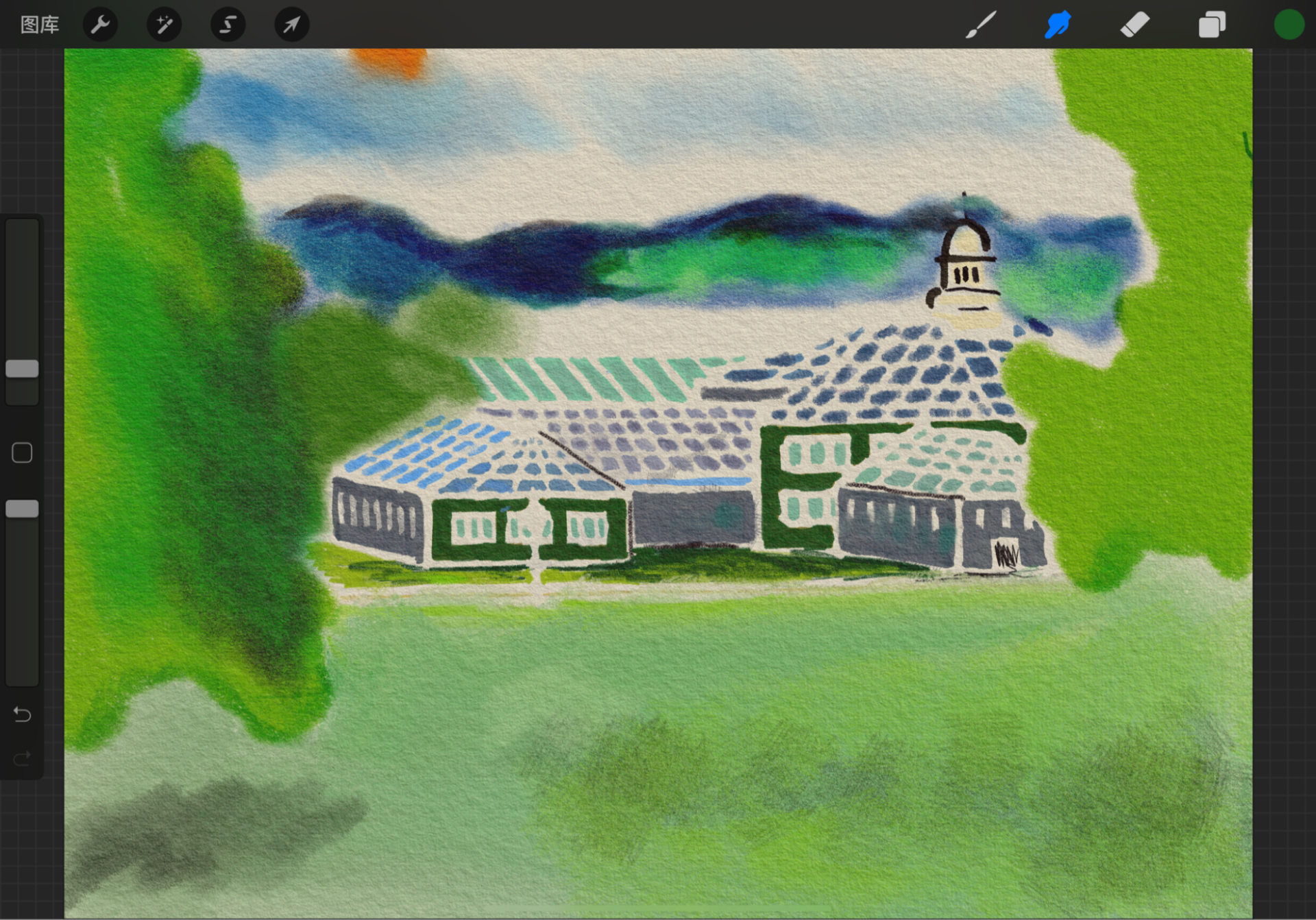 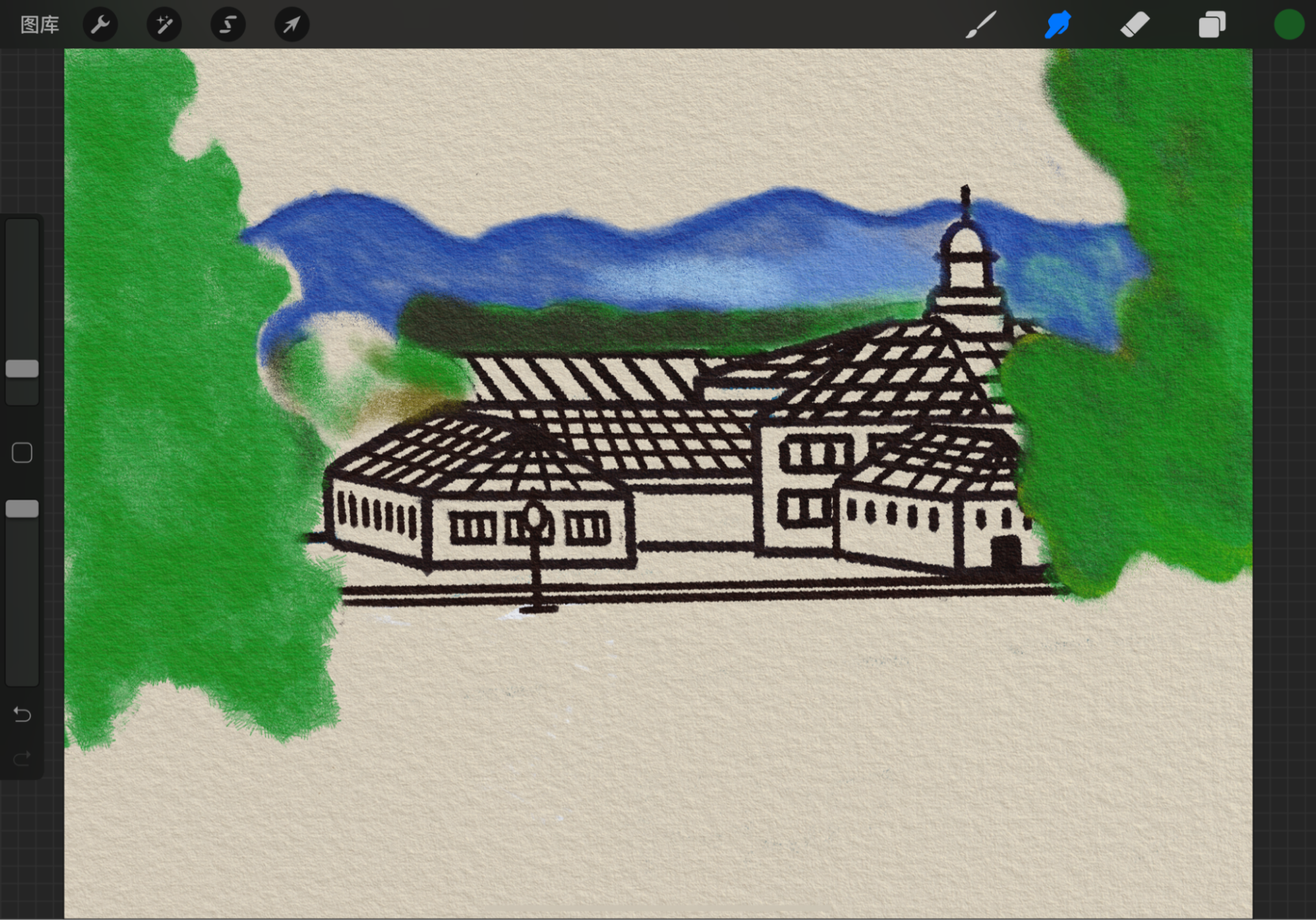 Nevertheless, Procreate has a learning curve, and might not suit every user. When I was drawing on Procreate, I felt that a lot of unique lines, textures, and colors were lost on the screen, specifically, a hand-drawn feel. However, I can see how this might be a good thing for some people if they actually intend to generate a “digital” feel. In addition, sometimes the screen did not reflect the movement of my pen accurately. As I improved my skill, this became less of a problem. I believe that as the user becomes more familiar with the software, the final product will come closer to a physical painting.

After exploring various themes, I ended up drawing the landscape of Middlebury College. I was not satisfied with some of the drawings I created in the beginning of the summer, for I was still getting used to the digital medium. I spent many hours and got very little accomplished. But after having a few failed “guinea pigs,” I found myself more and more comfortable with Procreate. In fact, I was amazed by all the things I can do with it. I also created a website to display some of the art pieces I created.

In the end, I put five drawings that I was satisfied with on the website. Out of the five drawings, four portrayed locations around Middlebury campus: Old Chapel, Battell Beach, the paths to Axinn, and Breadloaf Inn. Boy on the Hill is my first drawing. I also spent the most time on it because I was still getting used to the features on Procreate, such as sketching on different layers or drawing perfect geometric shapes . I also found several interesting brushes which I continued to use throughout other projects.

Old Chapel Under a Purple Sunset was the second piece in my collection. In it I first established the style of my entire collection: caricature, rough outline, and intense color combination. I tried to present a real-life object in a simplified way. It was difficult to recreate an iconic landmark in a straightforward way without losing too much detail. I used watercolor paper as my background and experimented with different colors such as pink, purple, and blue. Color experiment is a theme which I continued to develop in my other pieces. In general, this piece looked more “digital.”

In the third piece, I drew Battell Beach and the mountains at a distance. I used blue and green because they are two colors that go well together in landscape drawings. One famous example is Wang Ximeng’s A Thousand Li of Rivers and Mountains. As one can see from the composition, I tried to create the feel of a Chinese ink painting. I also utilized the cavalier perspective to emphasize the drawing as a whole.

Compared to other pieces, Paths to Axinn feels more “modern” and “minimalistic.” The main challenge was to present the landscape in an innovative way, but the audience could still recognize the piece. I painted the trees in black and the architecture in Tiffany blue, which surprisingly created a harmony. Both colors give the drawing a “cold” atmosphere.

The subject in my last piece was Breadloaf. I mixed blue, yellow, orange, red, and green together on the exterior of the building because together they create a nice contrast. I used the same colors on the ground, though they might have looked a bit funky. The style of the sky and the clouds in this piece were similar to that in other ones. My favorite part of the drawing was the dormer windows on the roof, which reminded me of Piet Mondrain’s Composition with Red Blue and Yellow. 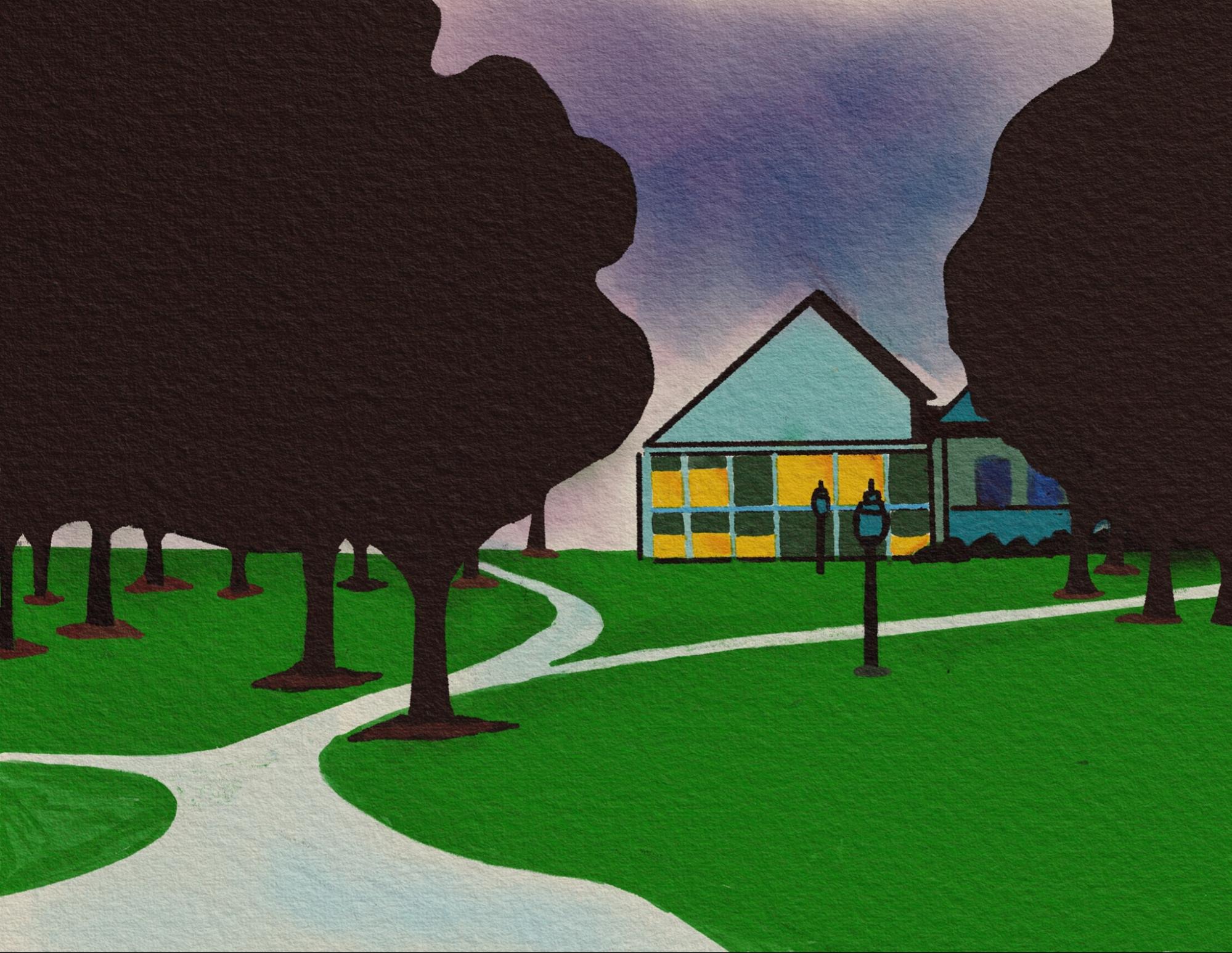 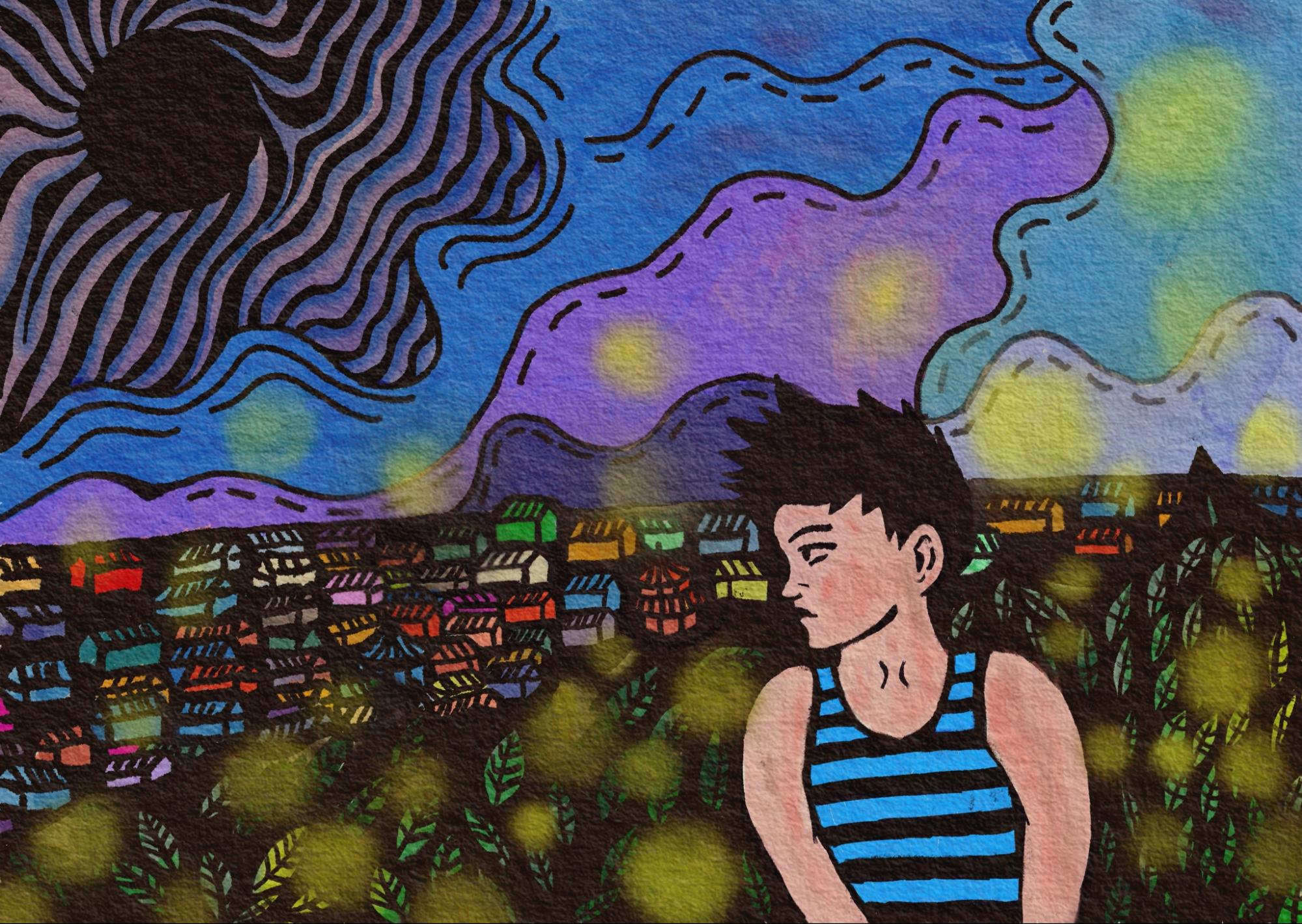 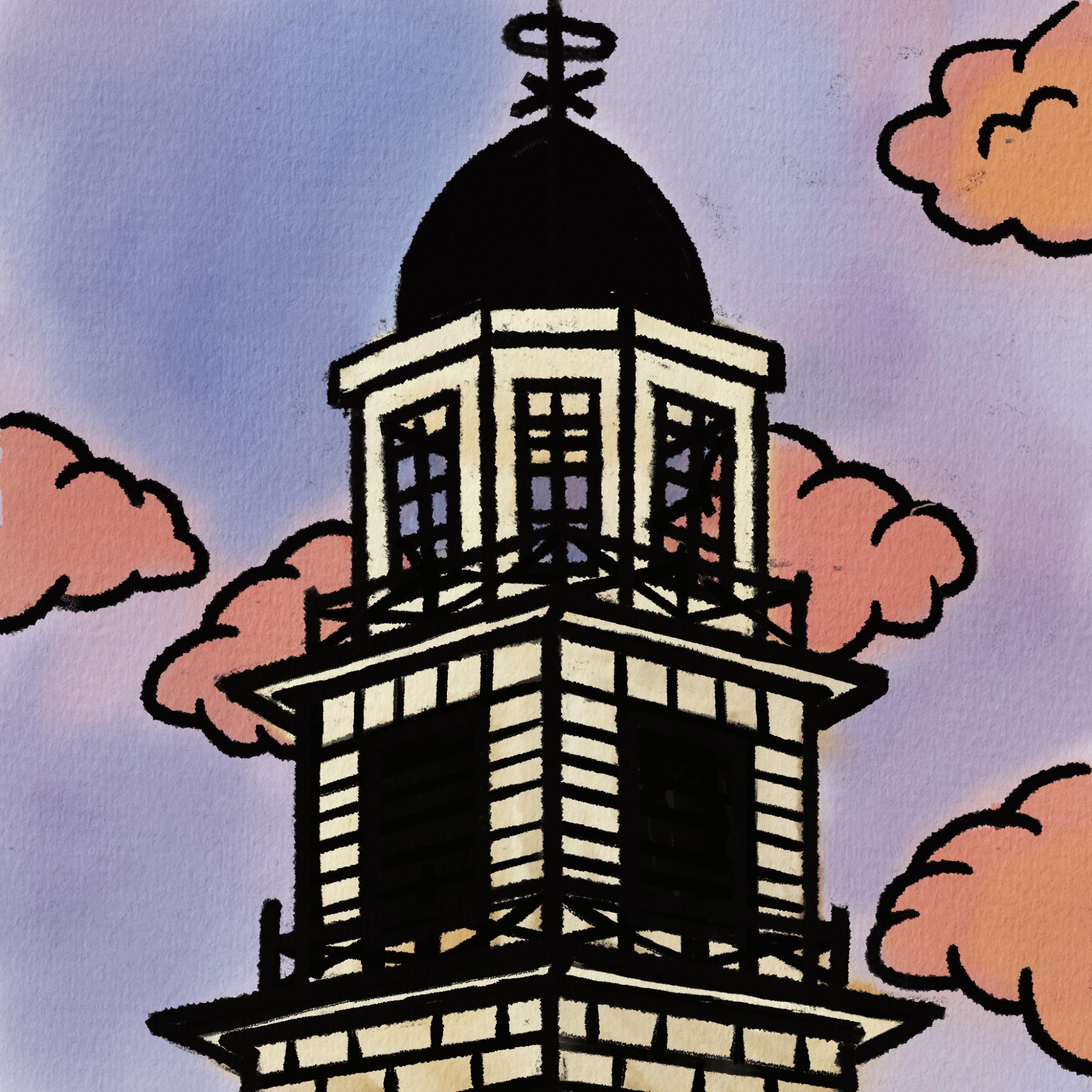 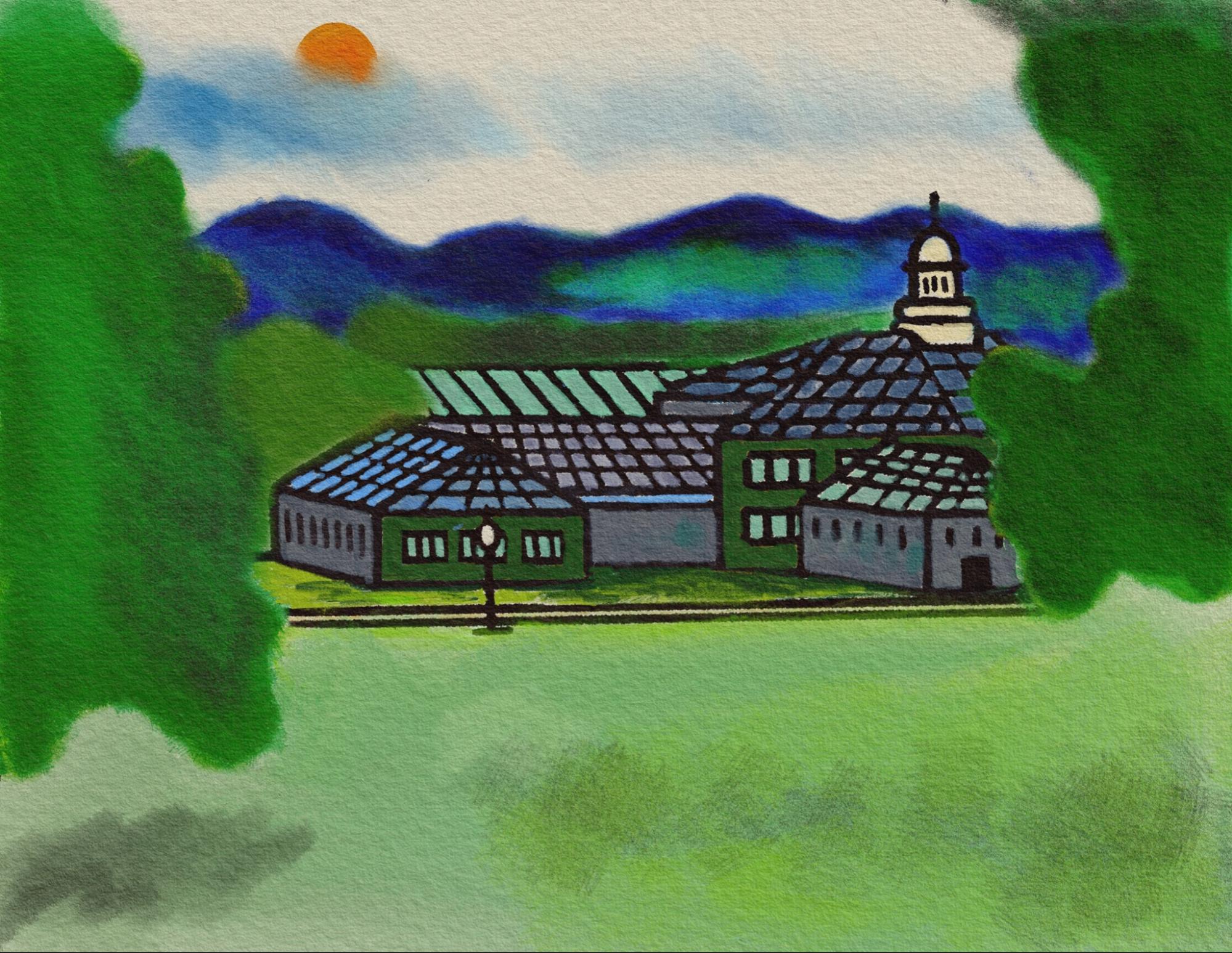 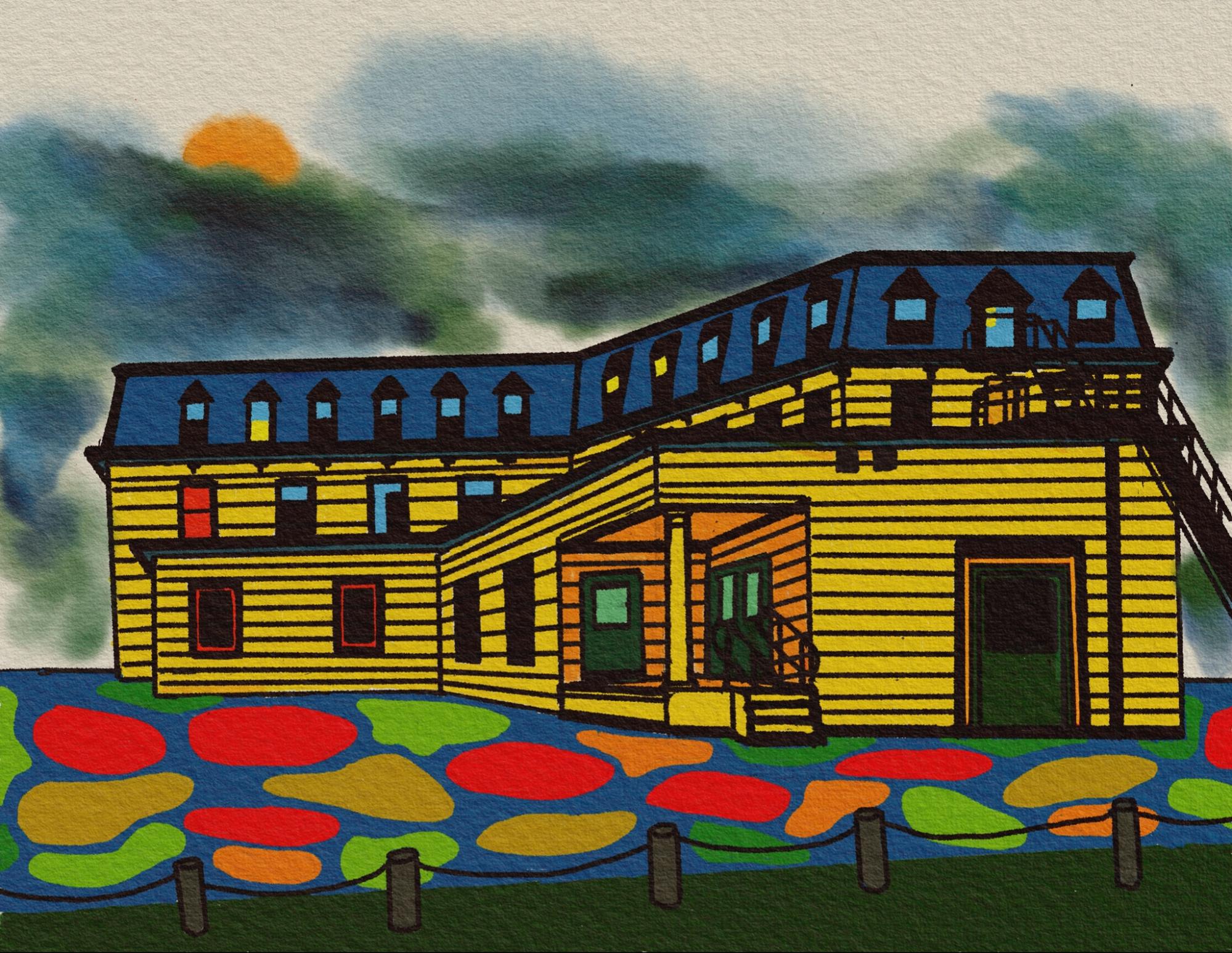 Both paper drawing and digital drawing have their pros and cons. In the end, I came to realize that the problem is not the tool, but how much time one spends with it. Many of us are intimidated by the idea of drawing on a digital device, but it is just like learning to walk or playing an instrument. Only when one has learned to walk is he able to run. When we are learning something new, it is important to have our feet planted on solid ground and moving forward at a steady pace. It is unrealistic to think that we can master digital art all of sudden even though we have never used it before. As the user becomes more familiar with the technology, they will find themselves liking it more and more.